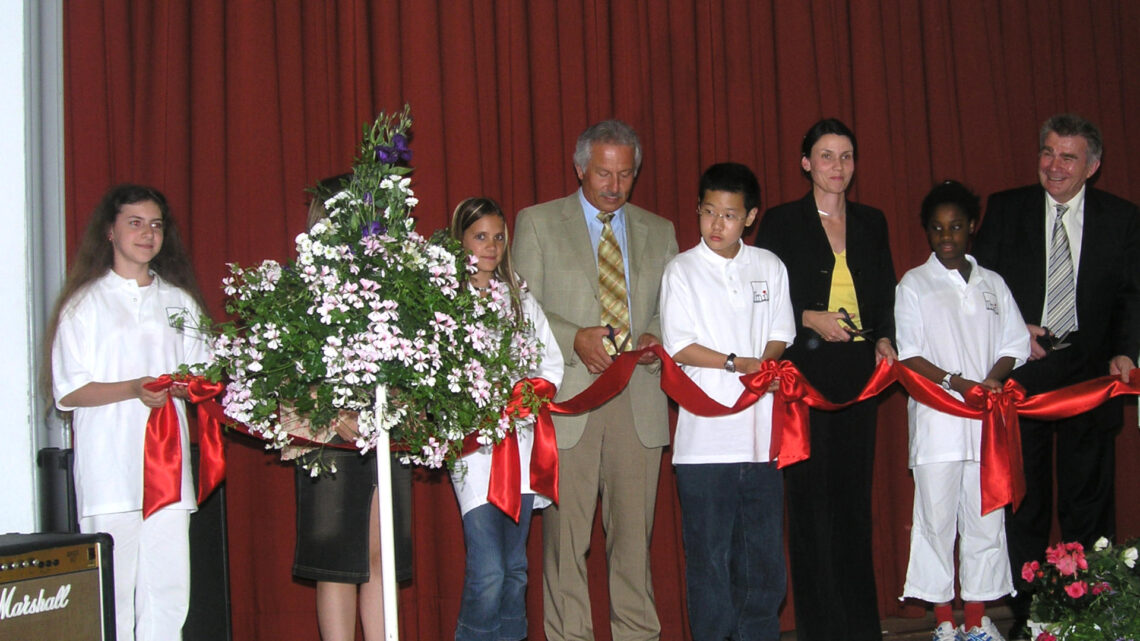 At the Humboldt-Institut the series of anniversaries does not stop. Last year, the 70,000th student arrived for a German course, and this year the Lindenberg site celebrates its 15th anniversary.

Remembering the start in 2004

“The very first German course in Lindenberg started on April 5, 2004,” recalls Lennart Güthling, the managing director of the institute. “Since the start in 2004, the number of students has risen steadily and Lindenberg is one of the most popular course centers for our young customers.” From April 2004 to today, a total of 16,541 students were registered for a German course in Lindenberg. Last year alone, there were 1,411 students.

“Lindenberg was our first year-round language school for children and teenagers,” explains Norbert Güthling, board member and founder of the Humboldt-Institut. Previously, there was such an offer only for adults. Güthling vividly remembers the summer of 2004: “After a few weeks of sweat-inducing renovation work, the school was suddenly filled with life at the end of June and was fully booked with 200 international students as well as teachers and staff members.”

The first students in Lindenberg came from Belgium, China, France, Great Britain, Italy, Korea, Mexico, Switzerland and the Ukraine. Katarina from Ukraine, who was the youngest student at the age of 9, was to come to Lindenberg several times in the following summers and became also the first Lindenberg boarding school student. She successfully completed her school career in 2014 with the German high school diploma “Abitur” at the Gymnasium Lindenberg.

Of course, there are many anecdotes associated with so many students. For example, some students thought that the creaking of the old beams in the roof was caused by a ghost. A student from Taiwan even went so far and sent home cut fingernails and hair by mail so that a shaman could check if she was already possessed by the ghost. No ghosts were at work when one morning it was discovered that sweets were being stolen. Some students had gained access to the pantry the night before via a freight elevator to quench their cravings for sweets.

In summer, over 200 young people from all over the world learn German every week in Lindenberg. Most of them live in the attached boarding school, others live with host families in Lindenberg and the surrounding area during their German course. On average, 50 students study and live at the Humboldt-Institut all year round. They are joined by the boarding school students who attend the Gymnasium Lindenberg. The latter are well integrated in Lindenberg’s social life. For example, as members of the TV Lindenberg (basketball, badminton, table tennis, swimming, boxing), as singers in the Gymnasium’s school choir or as volunteers in the local retirement home.

The Humboldt-Institut in Lindenberg

The building of the former orphanage is being continuously updated. Over the past few years, classrooms have been added and modernized to meet the growing demand for German courses. For two years all student rooms have been equipped with en-suite bathrooms. The expansion and modernization of the dining room was completed last summer. For 2019/2020 it is planned to modernize the rooms in the west wing and to create new study rooms for the boarders.

In addition to the premises, numerous employees from the fields of housekeeping, craftsmen, kitchen and administration were taken over in 2004, recalls Volker von Gossler, who has been employed at the Humboldt-Institut for 15 years and takes care of the travel groups of the youth guest house. A total of five former employees of the orphanage still work today for the Humboldt-Institut.

In addition to the boarding school in Lindenberg, the Humboldt-Institut runs another year-round boarding school for children and adolescents in the Upper Swabian town of Bad Schussenried as well as two adult schools in Berlin and Constance, which are also open all year round. In addition, there are temporary summer course locations in cities such as Kempten, Meersburg, Cologne, Dusseldorf, Munich, Vienna and many more.

For children and adolescents it is usually about improving their German language skills, as German is on the school timetable at home. However, numerous students want to come to Germany and prepare for the visit of a boarding school like the Schule Schloss Salem. In Lindenberg, the Humboldt-Institut is cooperating with the local secondary school, for whose classes students can apply after successful completion of a German course.

The article image shows the official opening ceremony in summer 2004.