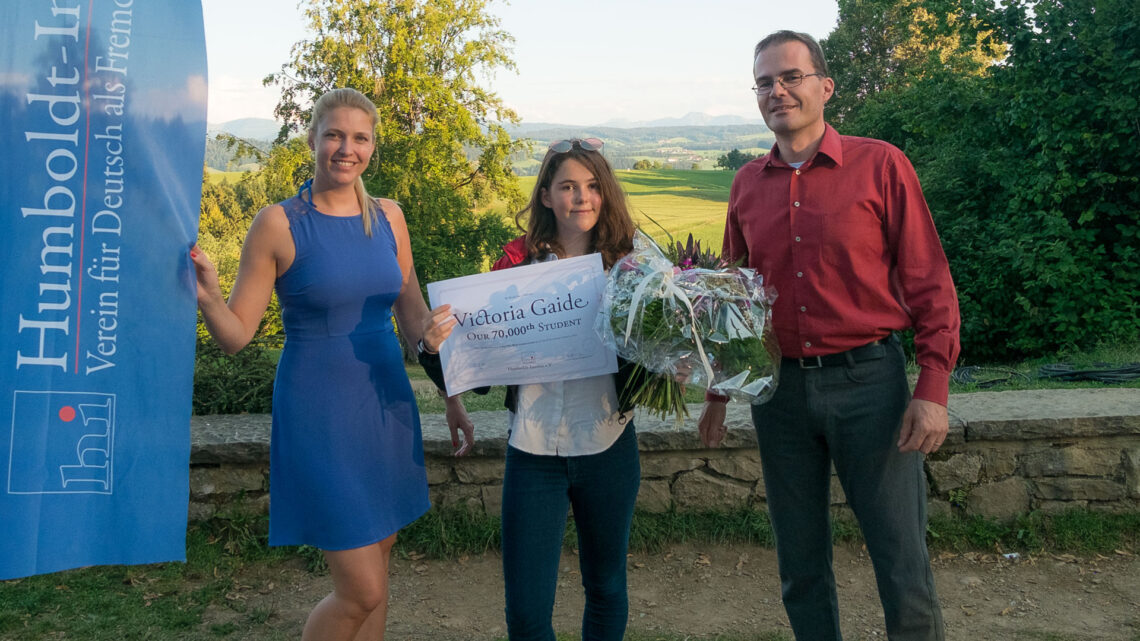 One highlight follows another at German language school Humboldt-Institut. Last year the school celebrated its 40th anniversary and this year welcomes its student number 70,000!

Victoria from Switzerland arrived on Sunday for her first ever German course with Humboldt. In the following two weeks she will improve her German together with over 200 fellow students from 32 countries at the Humboldt-Institut Lindenberg, at the foothills of the Bavarian alps. Thirteen-year-old Victoria already speaks some German and is looking forward to her course in Lindenberg.

The above image shows Victoria (center) with Ms Anika Schadtle (left), head of the institute in Lindenberg and Mr. Lennart Güthling (right), managing director of the Humboldt-Institut. As 70.000th student Victoria received a voucher for a two-week German course including accommodation and leisure activities in one of the Humboldt-Institut’s schools.

The Humboldt-Institut in Lindenberg

The school in Lindenberg was opened in 2004 and has since been very popular among students. During high season in summer more than 200 students from all over the world learn German in Lindenberg. Most of them are also housed in the school’s residence on campus. Others opt for accommodation in host families. During the rest of the year about 50 students learn and live in Lindenberg. They are joined by the boarding students who attend the local high school (Lindenberg Gymnasium). With its numerous students of various nationalities, the Humboldt-Institut brings an international atmosphere to Lindenberg.

German courses for all ages

“We are able to provide German courses for all ages and levels, from total beginner to advanced learner at every time of the year”, reports Lennart Güthling who took the position of managing director from his father Norbert in 2017. The special feature of the German courses at Humboldt is, that they are a one-stop shop. All schools are boarding schools and offer a full-package where students learn, live and eat under the same roof. The immersion into German language and the intensive instruction substantially speed up the learning progress. Word has spread and thus enrollments keep on increasing year after year. 2017 was the first year when student numbers reached a peak of more than 5,000 enrollments.