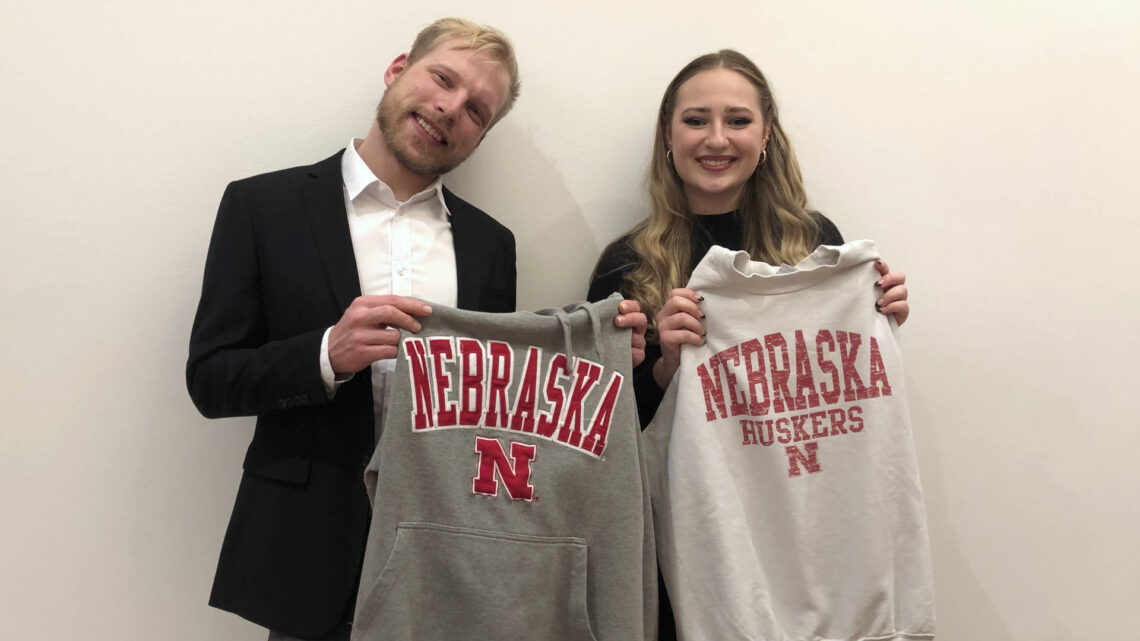 In the first part of the blog series “A Semester Abroad at a Language School”, we introduced you to the Colorado College from the USA, which completed a semester abroad at the Humboldt-Institut. In Part 2 of the series, we talk about the University of Nebraska-Lincoln (UNL).

Every year since 2017, UNL has sent a student group to the Humboldt-Institut in Berlin-Mitte for one semester. Their students attend our German courses there, receive accommodation with full board, take part in our leisure program, and attend a culture course that is held by their lecturer in our house.

We spoke to Jessica Akinshev (22 years old) and Harry Endrulat (27 years old) from UNL. In this interview, they tell us why they decided to participate in the study abroad program and how they like it at the Humboldt-Institut.

Hello, you two! Who are you and where are you from?
Harry: I’m Harry and I’m from Lincoln, Nebraska. Nebraska is a small state in the middle of the United States.

Jessica: I’m Jessica and I’m from Lincoln as well. I was born in Tacoma, Washington state, but my family moved to Nebraska in 2006.

What do you study at home in the USA?
Harry: I’m in my fourth year of computer science. You have to learn a foreign language at UNL’s Arts and Science College. I didn’t want to make it easy for myself, but neither did I want to make it unnecessarily difficult. So I figured that German is probably easier than Russian, but more difficult than Spanish. (laughs) Also, my sister lives in Germany, so I chose German. Now I love the language.

Jessica: I’m studying international economics and German. I studied German for four years in high school. My teacher was pretty strict, but she was also very kind. When I had to choose a subject at university, I thought about how much I enjoyed the German courses at high school. That’s why I chose German as one of my main subjects. The university lecturer reminded me of my high school teacher: strict but nice. So I am learning German because of the people that I think are great. (laughs)

Would you like to apply your German skills later in your job?
Harry: I’d love to! But I don’t know exactly how to do it yet.

Jessica: Yes! I can even imagine living in Germany for several years or maybe even forever. I also speak a little Russian because my parents are from Belarus. Maybe I could work for a company in Germany that operates in Germany, Russia, and the USA. The only problem is: Germany has no “Cheez Its” and no “Goldfish” either. These are my favorite snacks. And I love white cheddar cheese, but you don’t get that here either. That is the only flaw in Germany. (laughs)

How did you come to take part in the exchange program?
Harry: In my German class, all of the students talked about this program, which put it on my radar. I like German, I like Berlin, I like Germany! That’s why I decided to come here.

Jessica: When I was in my second year at UNL, I wanted to organize a stay in Germany on my own so that I could study there for a year at a university. My lecturers then spoke to me and told me that the program at Humboldt is better because the focus is on the German language. Former participants of the program then told us about their stays at the Humboldt-Institut, and somehow they all had a similar experience: They absolutely loved it. Now I am happy that I chose this program. You get to know so many international people at the Humboldt-Institut. It’s great to live and learn together. Many activities and excursions are offered. Everything is taken care of, and you are integrated very quickly. 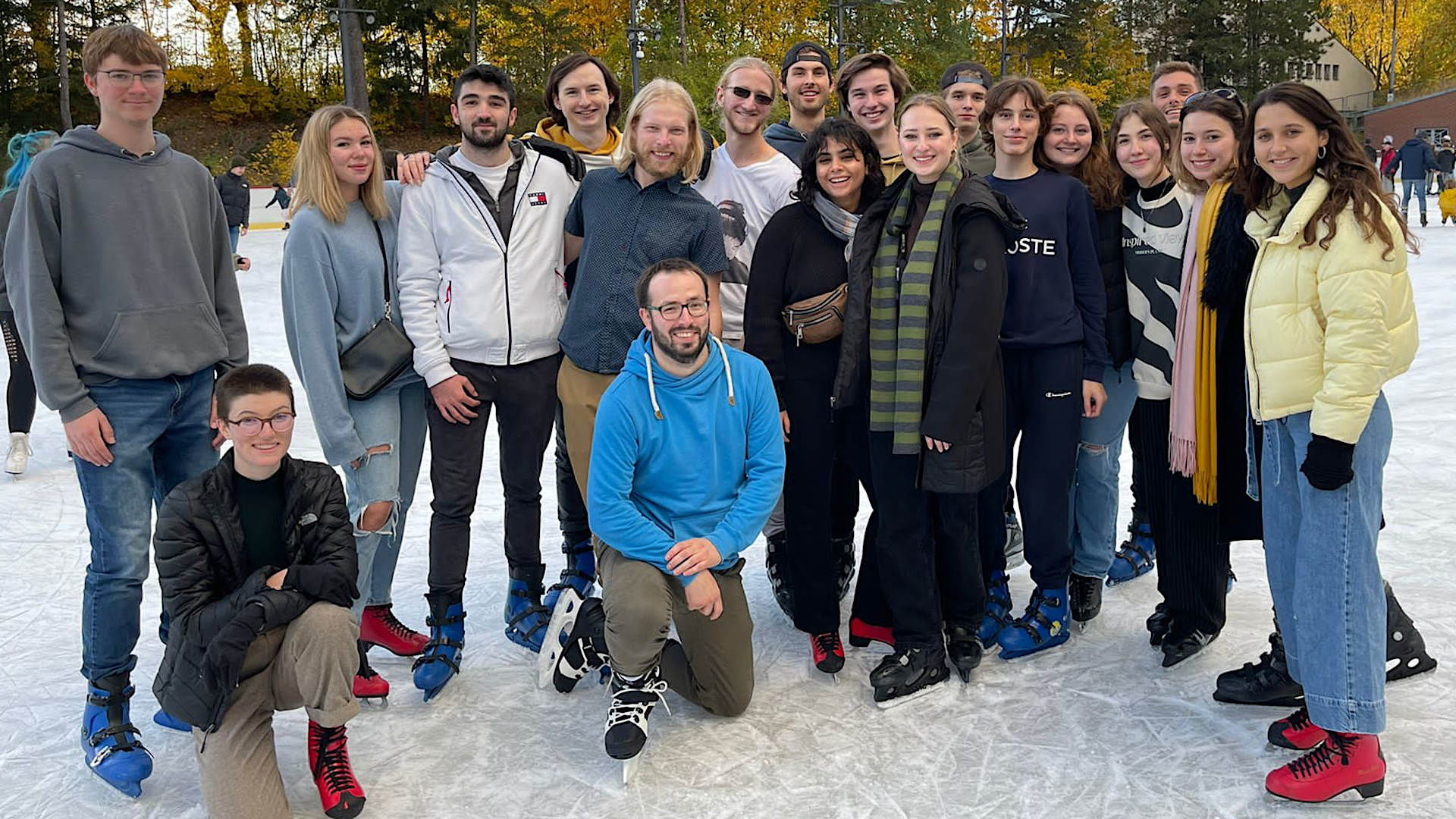 Jessica, you already participated in this program in the past. Why did you join it a second time?
Jessica: I was here in 2020 and had to end my stay earlier due to Corona. But I really loved it, which is why I came back with this year’s group.

What do you like most about Germany, about Berlin in particular?
Harry: I like the architecture very much, and I find the history exciting. We don’t have that much history in the USA.

Jessica: I especially like the culture and also the “grunginess” of Berlin, the fashion, and the way people behave. Germans have a certain kind of humor and a lot of self-confidence. Sometimes they’re intimidating, but in a good or challenging way.

Do you sometimes listen to German music?
Harry: Not that much, unfortunately, but of course I like “99 Luftballons” by Nena. (laughs) Our lecturer also introduced us to “Du hast den Farbfilm vergessen”. I enjoyed that. The song is a bit older, but the music puts you in a good mood.

Jessica: I was out once in the evening and saw young German people playing music on the street. We went to the musicians and asked what they were playing. They had composed the songs themselves. I later listened to the whole album on Spotify. It’s really good.

Have you already visited other cities in Germany?
Harry: Berlin, Potsdam, Dresden, Leipzig. We have also planned a travel weekend with the study abroad program from UNL. I will go to Munich. I want to look at the city and just walk through the streets.

Jessica: Hamburg, Dresden, Wittenberg, Rostock, Potsdam, Spreewald. But I’ve also been to Prague in the Czech Republic, which is only four hours by train from here. Potsdam is absolutely beautiful! Hamburg was interesting because the architecture is very different from Berlin’s. We went to the Elbphilharmonie there, but I still like Berlin better. Somebody is always doing something here somewhere. The city never sleeps.

How do you like the Humboldt-Institut and the German courses?
Harry: I like this school. It is so much easier to study when you don’t have far to go to school every day. We live right in the building where the lessons take place. It’s very comfortable. And the teachers are really professional.

Jessica: The lessons are very intensive. I’ve been learning German for almost 8 years, but I’m learning much faster here than at home in Nebraska, where I only have three lessons a week. It’s easier when you’re in the country and culture where the language is spoken instead of being in the USA and just doing a little homework. The employees at the Humboldt-Institut are all so nice. The secretaries, the chef, the director of the institute. They all support us and are there for us. Just like the leisure supervisor, who always spends time with us.

How do you like the food?
Harry: The food is usually really good, and the chef is very nice. He even takes our diets into account. Often the vegetarian food is even better than the dishes with meat. (laughs)

Jessica: Above all, I think it’s great that somebody cooks for me every day and I don’t have to cook myself. (laughs) The food is very tasty, although I actually like very spicy food, which is not very common here at the institute. My sister sent me a hot sauce and I’ll spice up the food with it.

Is the language course here in Germany recognized by your university in the USA?
Jessica: We get 15 credits for the Humboldt language courses and then another 3 credits for the culture lessons from our lecturer, which makes a total of 18 credits. I usually only get 12 or 15 credits per semester at home. So I don’t lose any time by staying in Berlin, I actually make faster progress with my studies.

Jessica: Yes, 100%! It can be stressful, but you learn German very quickly, the location of the school is great, and living here is really comfortable. The secretaries help us get a residence permit, and the Humboldt-Institut also helps other students find a university in Germany for the time after the language course. You couldn’t do all of that on your own as a student, but here you have the support. You get to know so many good people and make friends with people from all over the world, but of course also with Germans. I’ve watched shy students blossom here, open up more, and be more themselves. So it’s also great for the personal development, and above all a once-in-a-lifetime experience.

Thank you so much to the both of you for sharing your experience with us. We wish you a lot of fun learning German and all the best for the future!