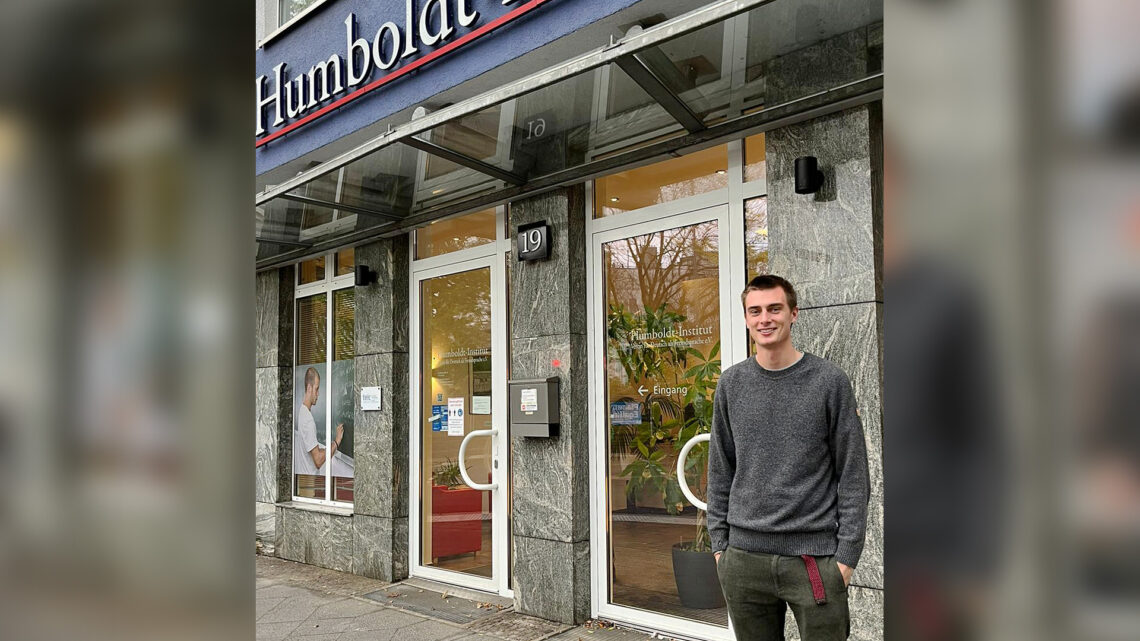 It’s a first for the Colorado College! The college from the USA has been sending its students to Germany for stays abroad for years. After many years in a more rural area, they chose Berlin as destination for the first time in 2021 and are now at the Humboldt-Institut.

We spoke to a Colorado student: Lucas Bush is 21 years old and originally from Boston. He studies geology and German in Colorado Springs. In this interview, he tells us why he learns German and why he takes part in his college’s exchange program:

Hi Lucas, thank you very much for your time. Let’s start with the first question right away: You are here with a group from the Colorado College. What is the program like?

Lucas: My home university in Colorado has many exchange programs around the world, including in Germany. This year the college is at the Humboldt-Institut in Berlin for the first time. We attend the German language courses of the Humboldt-Institut here and live with other international language students in the boarding school. Our lecturer from the USA is here with us as a group leader. We got a classroom from the Humboldt-Institut in which he teaches cultural courses. We receive a certain number of credits for the Humboldt language course as well as for the Colorado culture course, which are counted towards our studies back home. So it is more or less a semester abroad that we spend at a language school instead of at a university. 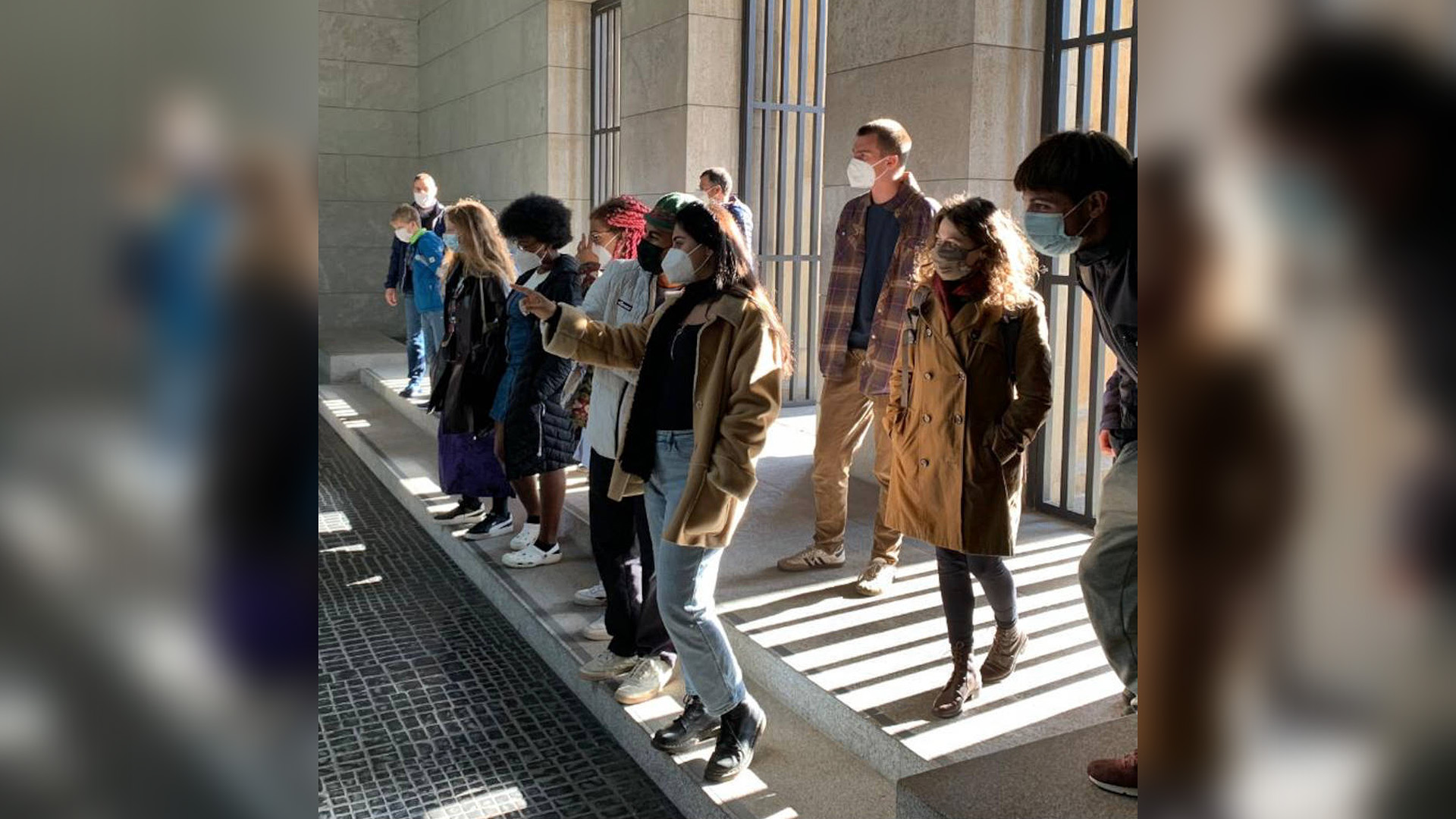 How did it come about that you decided to study German in the first place?

Lucas: In 2019 I worked in Berlin for four or five months. That was after I graduated from high school. At that time, I first didn’t know what to study. At a party in the USA, I met the boss of a non-profit organization from Germany. The organization creates musicals together with refugees and orphans. It also sets up vacation camps in Berlin and Stuttgart. I liked the idea straight away, and the boss invited me to work for him in his organization in Berlin. I accepted the offer and then did an internship at his company.

How did you experience your time in Germany back then?

Lucas: I immediately liked Berlin a lot, because it’s very different from Boston or Colorado Springs. There were many things that fascinated me: For example, waste separation is organized much better here, and local public transport such as the U-Bahn / S-Bahn is much easier to understand in Germany. I like that and I could imagine living in Germany one day. This, however, requires adequate German skills.

And how has your language acquisition been going so far?

Lucas: Our teacher at the Humboldt-Institut is really nice, and we have learned a little something in the first week. So far, however, I’ve only been taking the evening course, but I will soon switch to the intensive course because I want to improve my German as much as possible during the eight weeks in Berlin.

What is your first general impression of the Humboldt-Institut?

Lucas: I’ve only been here for a few days, but everything’s been great so far! The driver during the pick up from the airport was totally welcoming and warm. He helped us until all the students found the meeting point. The location of the school is just great, right in the middle of Berlin! The food at the institute is also delicious and the accommodation is really nice too. I don’t have a roommate at the moment, but from next week I will probably share the room with another student. I really have no reason not to like the institute. 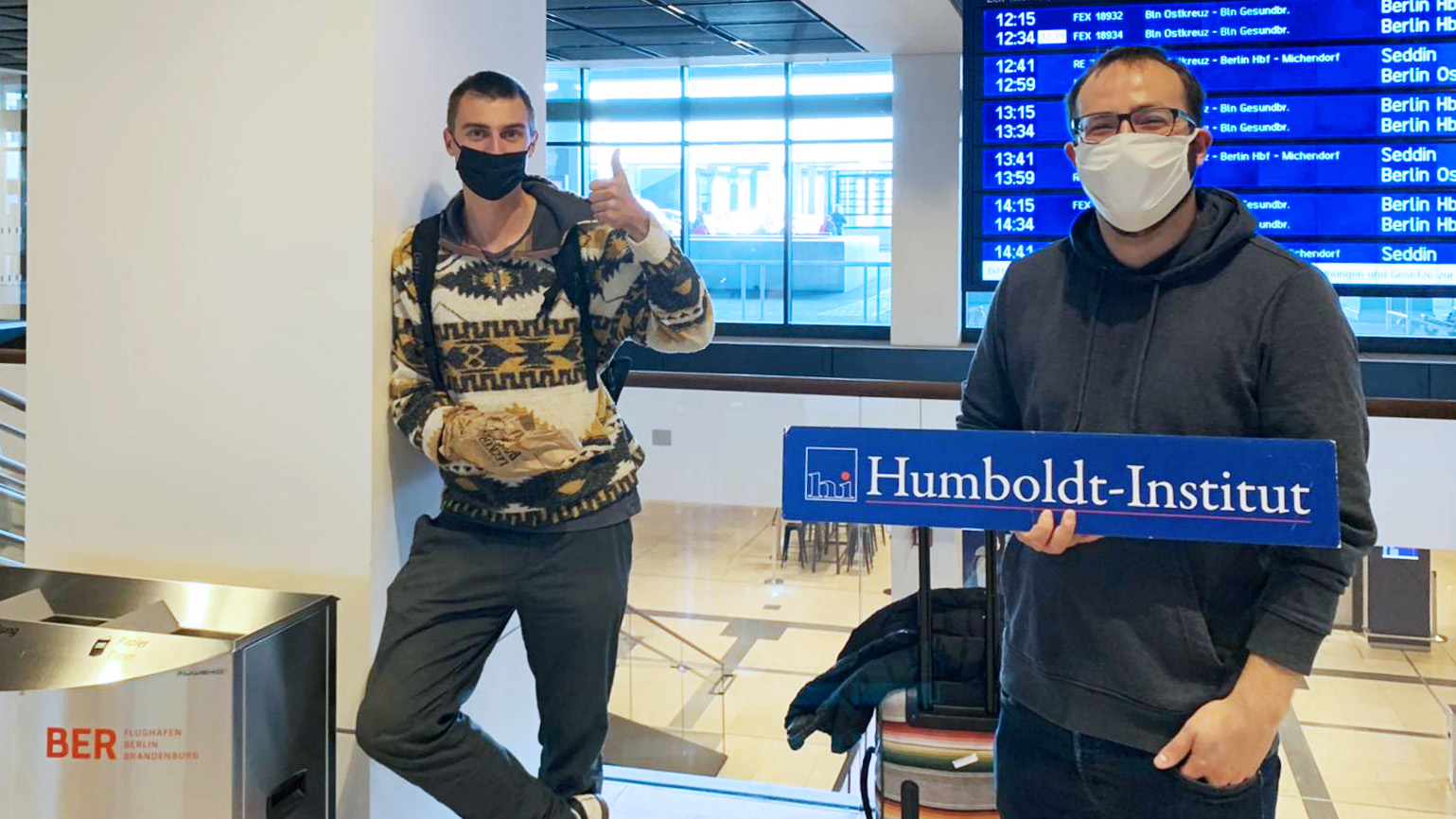 In addition to German, you also study geology. What is it that fascinates you most about it?

Lucas: When I decided on the subject, I was particularly enthusiastic about the announced excursions to other countries. Then, however, Corona came and the excursions mainly took place via Google Earth. (laughs) It’s nice to be able to travel again and to be in Germany now.

How would you like to combine geology and German in the future?

Lucas: My geology professor has colleagues in Germany and Switzerland. She offered me to contact them for me. For example, I could live in Germany or Switzerland. I have been to Switzerland before when I was around 13 years old and vacationing there with my family. It was very nice. I found the mountains really cool. You can’t find those in Berlin, but Germany’s capital offers a lot of history and art instead.

What do you think of German art, such as music or film?

Lucas: I saw the band Annenmeykantereit live in 2019. I sometimes read their lyrics even if I don’t understand them very well yet. I saw Milky Chance at Fridays for Future at the Brandenburg Gate. The band sings in English, but they also come from Germany and I like their music. I can also recommend the Netflix series “Dark”. In Colorado we saw the film “A Coffee in Berlin”, it was great too.

Thanks for the great tips! One or the other reader will definitely check out the music and films now.

We’d also like to thank you for your time, Lucas. We are very happy to hear that you like it here so much, and we hope that you will continue to have a great stay at the Humboldt-Institut. Wishing you all the best!

Continue reading: A Semester Abroad at a Language School – Part 1