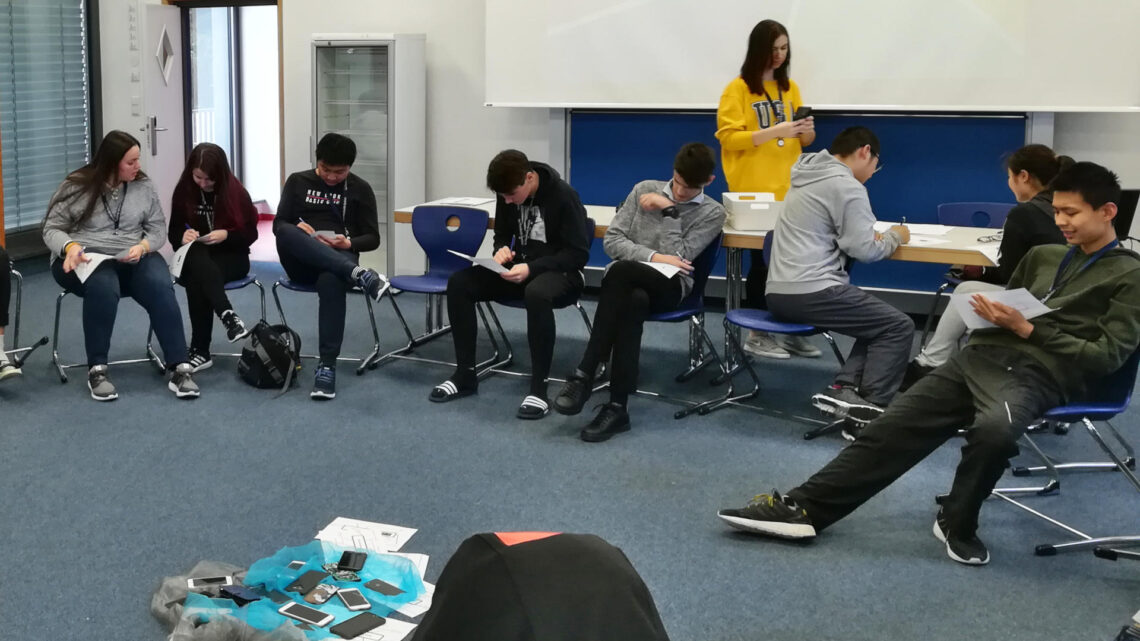 As part of the leisure program, students at the Humboldt-Institut can choose activities from the fields of sport, creativity and culture every day. In addition to practicing and improving their German language skills, these activities should also encourage students to think.

An example of this is the “Know Your Limit” series of workshops in Lindenberg, which is aimed at students between the ages of 14 and 17. In different areas of life, young people should assess and question their own behavior. Recently, the topic of smartphones was the focus of the series. The main question of the afternoon was “When does smartphone usage become too much and what can you do about it?”

Using a short film, subsequent questions and a self-test, students should assess how often they use their smartphone and what role it plays in their lives. Questions were asked, for example, when students switch on their phones, how often they check for new messages, whether you can concentrate on learning despite a smartphone being around, and much more.

Students were then able to evaluate their own usage behavior using a point system. The scale ranged from 0 points and the control of one’s own media use to the upper end of the scale from 7-10 points. The latter meaning that smartphone and media consumption dictate your everyday life.

Minimize Distraction
Strategy 1 aims to minimize device distraction. For example, you can mute Facebook and Messenger while doing your homework. This way you can concentrate better and finish faster. Is it really important to get the new message right away, or is half an hour later not good enough?

To check your own behavior, there are apps like Menthal (Android) that show how often the user uses which app or how often the screen is unlocked. Apps like Stay Focused or Cold Turkey go one step further and allow certain apps or even the entire smartphone to be blocked for a period of your own choice.

Optimize your Usage of a Smartphone
Strategy 2 aims to optimize the interaction with the device. Instead of being distracted, everyday activities can be made easier with a smartphone. Calendars and lists help with self-organization and give an overview of all important tasks and dates, such as music lessons, lectures and remind you ahead of time. So you can organize yourself more effectively and have more time for other things in life.

In conclusion and as a general guideline, one can say that 60 minutes of smartphone usage per day should be enough.

The topic of data protection and handling of personal data was also discussed. The goal is to make students aware of the information that they disclose about themselves. The series “Know your Limit” will continue with other topics, such as healthy eating.