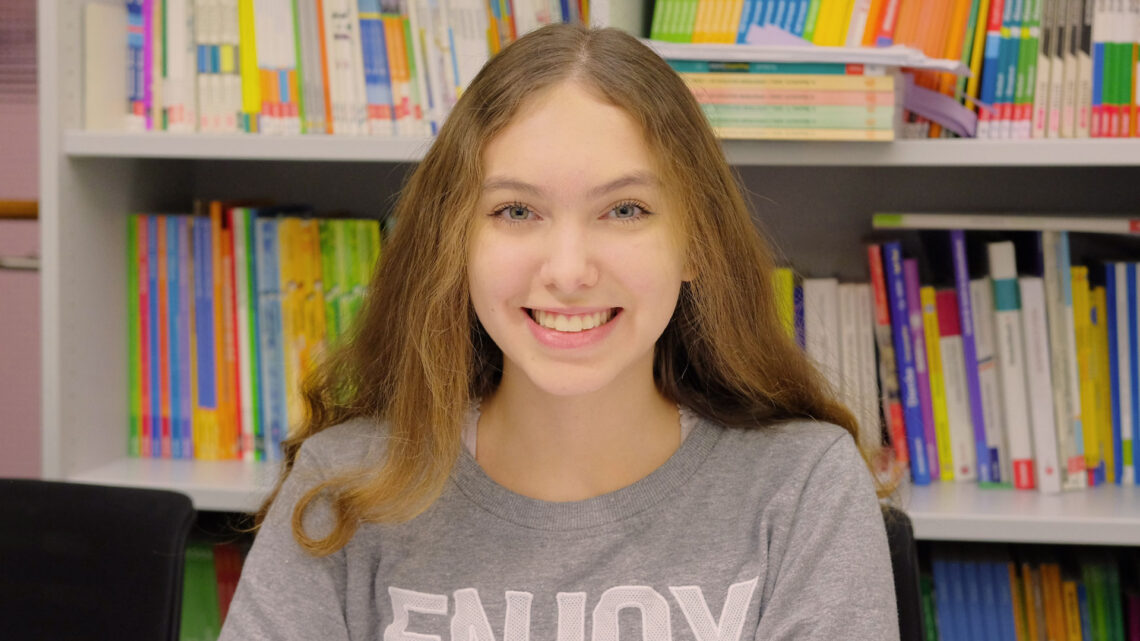 Today we talk with Isabela, who has been attending the Lindenberg Gymnasium since September and previously learned German at the Humboldt-Institut in Lindenberg.

Hello Isabela, can you please briefly introduce yourself?

My name is Isabela, I am 16 years old and I come from Sao Paulo in Brazil. I have been in Lindenberg since February 2019 and started a German course as a complete beginner. Passing levels A1, A2 and B1, I also finished level B2 in time for the start of the school year and right now I attend 10th grade at the Lindenberg Gymnasium.

Why did you decide to go to school in Germany and why did you choose Lindenberg?

I have always wanted to go to school abroad and was interested in boarding schools in Germany. I searched for information on the Internet and found the Humboldt Institute pretty quickly. I did all of this myself and without the help of my parents. It only took 1.5 months from the idea to the start of my German course.

How did your parents react to your plans?

How were your first days in Germany and what were your expectations?

I had imagined that people would not understand me and that I would never learn the language. But everyone spoke very clearly. In addition, everyone is very nice! When I arrived in Lindenberg, my father accompanied me and we were given a house tour by Miriam, one of the counselors.

Levels A1 and B1 were the most difficult. The difficulty grew over time and the new vocabulary was not always easy to learn. But slowly I learned to recognize the context and to guess the meaning of unknown words.

Now this is no longer a problem for me and I have made it from A1 to B2 in just six months. I learned and worked a lot for that. Before I never thought that I could learn German so quickly.

The workshops and activities in the afternoon were also very good for me, because I heard a lot of German there and could practice myself. In order to practice my German, I helped and showed new students their rooms and talked a lot with the Humboldt staff.

Of course it also helped that I was the only Brazilian and I couldn’t speak Portuguese to anyone. But being the only one wasn’t so bad.

Where do your classmates come from and how do you get along?

We are all from different countries and I quickly found new friends from China and Vietnam. My classmates also come from Italy, Korea, Romania, Russia, Ukraine and Thailand.

As a result, we learn a lot about our cultures. On certain evenings, each student introduces her or his home country and native language to the others, in German! I particularly enjoyed the evening with a Turkish group. They prepared Turkish food and music. We all danced and celebrated together. It was a great experience!

In Lindenberg I saw snow for the very first time in my life and it didn’t feels as cold as I thought. At the Winter Olympics with all students, we even built a snowman outside. I’ve always wanted to do that!

How were your first weeks at the Lindenberg Gymasium?

On the first days, the teacher made the seating arrangements and made sure that there was always an international and a German student sitting next to each other. We help each other and work together. It was difficult that there is often an oral examination and we have to learn quickly. That was a change for me because I was not used to it from Brazil.

We have more subjects in Germany and I have to catch up on some content. For example, I’ve only had one year of biology, chemistry, and physics. Luckily, Humboldt is like a family. We help each other, e.g. in maths and science. The teachers in the remedial classes take their time and explain everything so that we understand it.

Do you already know what you want to do after school?

I would like to study medicine in Germany and become a doctor.

Thank you for the interview. We wish you all the best for the future!