How to Get out of Your Comfort Zone and Learn German13. May 2022 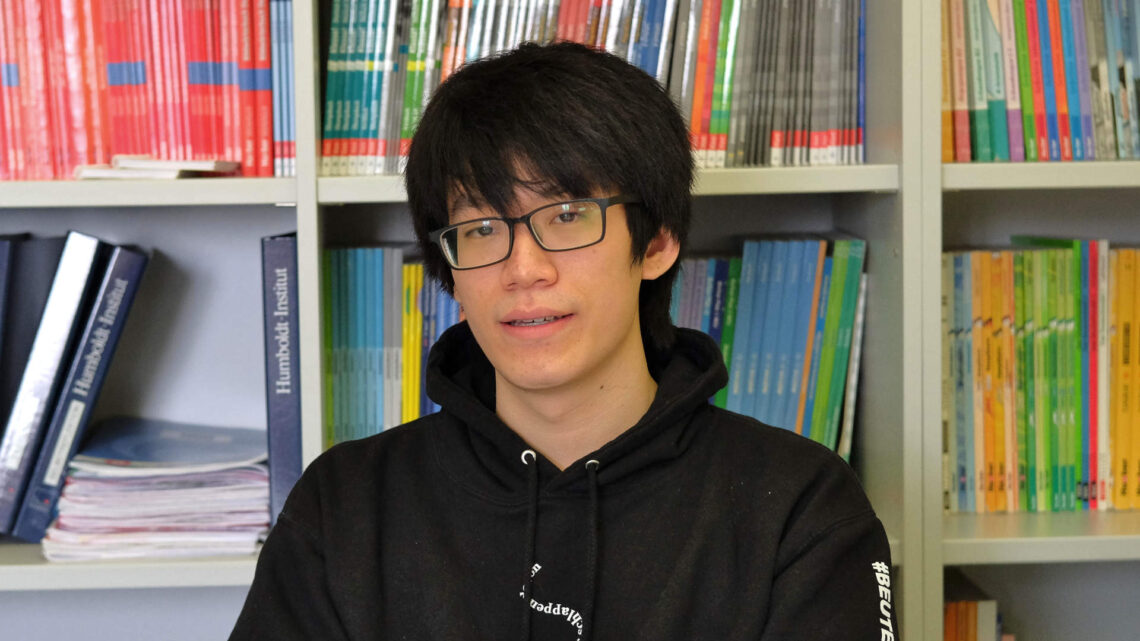 Our student Jakob tells us about his political commitment, his musical talent and his experiences in Lindenberg. Jakob comes from China, currently attends the 12th grade at the Lindenberg Gymnasium and is about to graduate from there with the Abitur. He tells us about his beginnings with the German courses at the Humboldt-Institut and his school days in Germany. Of course, he also has a tip for learning German.

Can you briefly introduce yourself?

Gladly! I am Jacob and I come from China. Ever since I was 14 years old, I wanted to go abroad and attend school there. I was fascinated by the idea of going off on my own and seeing the world. I discussed this with my parents and fortunately, they supported me.

Why did you start learning German?

Through a classmate, I got the idea to go to school in Germany and maybe study there.

In China, I started taking German courses and made it to about level B1 in Tianjin. During the courses in China, we learned a lot of grammar and I found it difficult to apply the German grammar I learned since we mainly spoke Chinese in class.

I then flew to Germany and continued my German courses at the Humboldt-Institut in Bad Schussenried from level B1.

„ I can only emphasize how important it is to accept such challenges and leave your comfort zone.“

What experiences did you have there?

Before my arrival, I was looking forward to the famous German Autobahn. But unfortunately, the weather was bad and therefore we could only drive very slowly (smiles).

What impressed me the most after my arrival was the silence. I went to the balcony in the evening, and it was absolutely quiet. I wasn’t used to such silence from home at all.

The first few days were a big adjustment, even though I already had some knowledge of German. At the Humboldt-Institut, teaching is exclusively in German, and I needed some time to get used to it. However, since almost only German was spoken in everyday life, this worked out quite well. This immersion in the language helped me a lot in retrospect, as it forced me to communicate a lot in German myself.

I can only emphasize how important it is to accept such challenges and leave your comfort zone. Because that’s the only way I was able to consistently improve my language knowledge. In retrospect, I can proudly look back on my own achievement.

I also consciously decided not to use an electronic dictionary and instead started working with a monolingual dictionary. This allowed me to memorize the meaning and usage of the new vocabulary much better, and also to use it myself more quickly. I can only recommend this way of studying to anyone learning a language!

How was your start at school in Germany?

Before I started at the Gymnasium Lindenberg, I was at a music high school in Bavaria. So, I knew roughly what to expect. In general, the change from a language school to a “real” school is a big change, similar to the change from China to Germany. The expectations are a bit higher, and you have to perform similarly to your German classmates, for example when it comes to writing a short story. As a non-native speaker, this is much more difficult, simply because you have a smaller vocabulary.

In Lindenberg, the extracurricular activities at the Humboldt-Institut helped me a lot with my integration. But my German classmates also played an important role, for example when we cooked together or simply visited each other. During a hiking day, we invited our classmates and teachers to visit the Humboldt-Institut, so they could see how we live at the boarding school.

You are a member of the first Lindenberg student parliament. Can you tell us more about this project?

When I heard in 2020 that there was to be a student parliament in Lindenberg and candidates were being sought, it was immediately clear to me that I wanted to represent the international students and their concerns.

What are your tasks?

We are eleven members in total and have regular public meetings with the city administration, where we can present the concerns of the young people. For example, we campaign for better waste separation and for a skate park. In addition, we have many other ideas. We also organize political salons to which we invite students to discuss a wide variety of topics. The Bavarian Broadcasting Corporation and the local newspaper have also reported on our work.

Note: For more information on the work of the Youth Parliament in Lindenberg, follow them on Instagram at @jupalindenberg.

Do you get involved in other areas besides the student parliament?

Since my music teacher suggested it to me, I’ve been meeting regularly with other students from the district of Swabia at the student talent center for chamber music in Memmingen. I play the piano and practice for about 1.5 hours a day, sometimes longer during vacations. In addition, I take the Additum in music at the Gymnasium. So, I can take music as an examination subject in the Abitur and improve my final grade.

You’re about to graduate with the Abitur. What are your plans for the time after that?

I took ethics at the Gymnasium, and psychology is part of the curriculum for this subject. Since I’m very interested in this subject, I’d like to study psychology starting in the winter semester and, in addition to my Abitur, I’m preparing for the selection process in psychology for Baden-Württemberg. With a good result, I can hopefully increase my chances of getting accepted for psychology at a university in southern Germany.

Thank you very much for the interview, Jacob! We wish you every success with your Abitur and your plans for the future!

From Venezuela to Germany – My German Experience in Berlin, Part 1 Archive My Path to Studying Medicine in Germany